Today a bugfix was released on GIT to address issues with IP detection in the network.

A maintenance release 1.1.6 was published on a newly created project site on GitHub. With this release we take care of recent changes from Python 3.8. which caused the application to stop working on newer distribution releases.

Sadly, support for Bluetooth or an Airport Express was no longer possible.

All other streaming methods such as Icecast support or support for DLNA streams were adapted to recent changes, including several bugfixes.

Thanks to Peter (again) we discovered a nasty crash when audio files with missing metadata were played. This could be fixed in release 1.1.5 published today.

Additional note: I am so pleased to see Stream2ip run very smoothly on Manjaro Linux.

With version 1.1.3. we are now much better prepared for Wayland and upcoming Ubuntu 18.04.  The Stream2ip GUI will render better on an Xorg session. The application icon colors are not properly updated in Wayland. Nevertheless the grey application launcher icon is now present in Wayland too.

Sadly application indicators are no longer available. Don’t hesitate to contribute any solution for this.

Thanks to Peter we now also support newer releases of Clementine and Audacious.

Sadly Virtual Box can’t run Wayland but we finally got hands on a bare metal test suite for Ubuntu 17.10. running on Wayland and GNOME. It is not much of a surprise but stream2ip does run and it performs as usual.

Please do not hesitate to report bugs if your system behaves differently.

A minor glitch is that the launcher and the top bar are not yet ready for the stream2ip application icon.

Newer releases of pulseaudio-dlna became more stable, and more versatile. This increasingly makes this application our number one choice of an easy-to-use command line tool for streaming DLNA content over the network.

When using it with stream2ip we better disable some of its new features such as automatic device discovery, and switching back to the default sink. Both can still be done with stream2ip’s own routines. To avoid unwanted side effects it is therefore recommended to create a settings file to override some of the new features.

Now that the Bug-Squad (you) stroke again telling me of bugs that should not exist I took the opportunity to make two additional little changes in the code while at fixing bugs.

We now are no longer dependent of appindicator. From the beginning of its days stream2ip provided an application indicator only in case it was installed on the system, but putting it in as a dependency was a bad idea. Stream2ip runs fine without, and not all distributions out there use it. So here we go – off goes the dependency. We should not depend on things we don’t always need.

Another thing that bugged me was the rather huge help page displayed on pressing the help button. It is fine on a desktop screen but people may run it on displays with a limited  resolution. It had to be much smaller. I tried to squeeze it down as much as possible.

Ouch – there were more bugs than ever expected. Time to fix them. Now the DLNA renderer URL will work. On the way there I removed the somewhat awkward process of having another program s2ip_setup just for issues with preferences. We will now be able to runs stream2ip with the command line option -s to repair a bad preference setting.

On testing all again and again it appeared that the pulseaudio outputs changed in the Vivid release. So a quick adaption was needed too.

Finally this tutorial is integrated into stream2ip release 1.1.0 which was published yesterday. As people may not always want to go online I had to integrate a short help which comes in a single window. Tabs will lead to the corresponding streaming method: 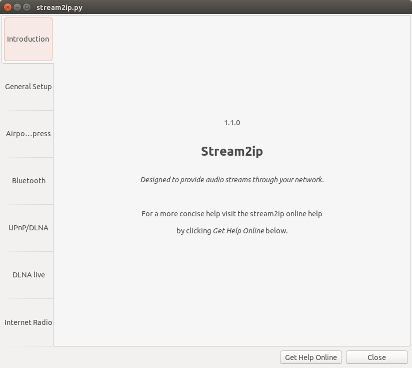 In addition the DLNA discovery process was completely rewritten to be prepared for changes in upcoming releases of pulseaudio-dlna.

For a long time I was looking for a solution to be able to push the audio from my computer to a DLNA-renderer in my network. From a post on Ask Ubuntu where I asked for this I finally got noticed of a fine new application that could do all this: pulseaudio-dlna. After some tests I found it was reasonable stable and would fit nicely to my collection of streaming solutions.